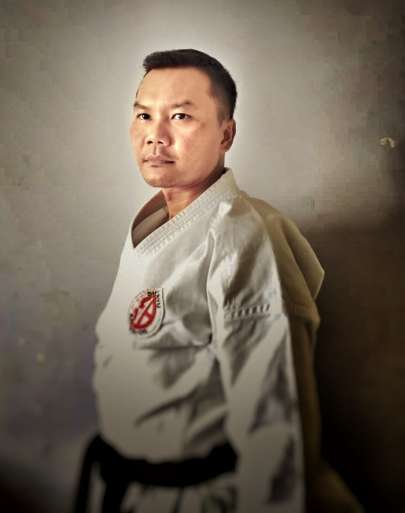 1) How old were you when you started karate?
My journey in learning karate started when I was 19 years old. It was 1998.

2) why karate? Not other martial art
Before I learnt karate, I learnt few martial arts which is silat and taekwondo during my primary school time. But the journey was so short and I stop after few months afterjoining the class until I met a friend who invited me to join karate class. That was during my university time. Attracted to her explanation about karate, I invested my time to visit the class and saw the late Shihan Sheikh Nasir instructing his students. Attracted to his teaching, I immediately join the class without doing any research about what karate is. The class located at IIUM, Gombak. My students like to ask me why did I choose karate-do? I chose karate-do because the simplicity of the techniques supported by the beauty of the KATA that karate has.

3) what are you grateful to karate for?
There are a lot of things that I learnt from karate. I see karate more than just a martial arts. I see karate as a way of life that build my current self.  And the most that I grateful for, I learnt karate-do from the late Shihan Sheikh Nasir, the 2nd generation karate ka in Shito Ryu Karate Do lineage.

4) what did you wish you did differently?

5) what is your wish for your students and the future of the dojo/tska
I always said to my students that they have to see karate more than just a martial arts. I said, through karate-do, you can learn to plan your life. And, I feel so grateful that most of my students become a successful person. That is the biggest wish of every teacher, including me. And I always envisioned that karate-do can be a platform for every students be it in school or university for them to learn not only self-defense but as an inner self-building platform.

6) what is your significant moment in karate
In my karate do journey there are many significant moment that I never had regret experience it. When I was a karate athlete, during my first time selected to represent Shito Ryu in MAKAF in 2001, I was set to fight Sensei Kong Tai Moon, a well-known karate ka and my own teacher after I defeated PDRM karate ka in the first round. The result is expected. I was defeated badly but it was the golden moment I ever had to fight a well-known Malaysian karate national athlete and the best part, he is my teacher.  However, what makes me keep on rendering my karate knowledge to students is because of the late Shihan Sheikh Nasir who whispered to me when he was bed-ridden due to his illness in 2001. He said, “Adi, keep on passing the knowledge”. I took his advice seriously.
Shihan Sheikh Nasir passed away in the eve of 2002.

7) what legacy do you want to leave behind
As a karate-do teacher, I wish my students will continue my efforts to introduce and teach karate-do to younger generation. I wish they keep on practicing the physical training that they had from me and benefits from all advices that I taught them, be it karate knowledge as a martial or karate-do as a way of life.