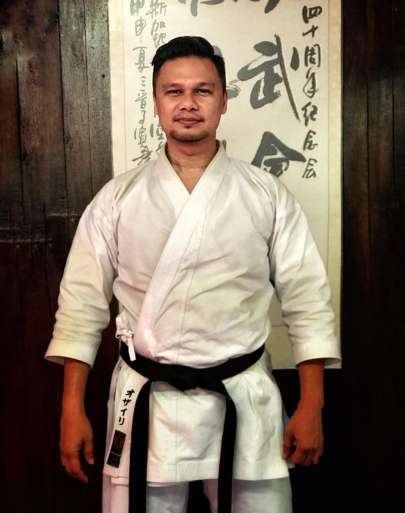 1. How old were you when you started with karate?
I was 13 and karate was taught in school (St John’s Institution). Believe it or not, I was a fat boy. I chose karate as I was influenced by a video game called street fighter 2.

2. Why karate? What other options did you have?
I had a group of 10 friends who formed a karate team. We encouraged each other and that is how it all began. We also met the late Senpai Satha who inspired and motivated me. He was like a father figure to all of us, not just for karate matters. I guess in a way, karate chose me!

3. What did you wish you had done differently with regards to karate?
Nothing. The greatest teacher for me was failure as I learned from it and improved myself. I am what I am because I persevered and look at all experiences positively.

4. What was your most significant moment in karate?
One was when I beat all my St John’s seniors in kumite and kata competitions. The second was when I participated in the 4th world shitoryu tournament.

5. What legacy do you wish to leave behind?
A dojo of my own and some to take care of it with me who shares the same ideals as I do.